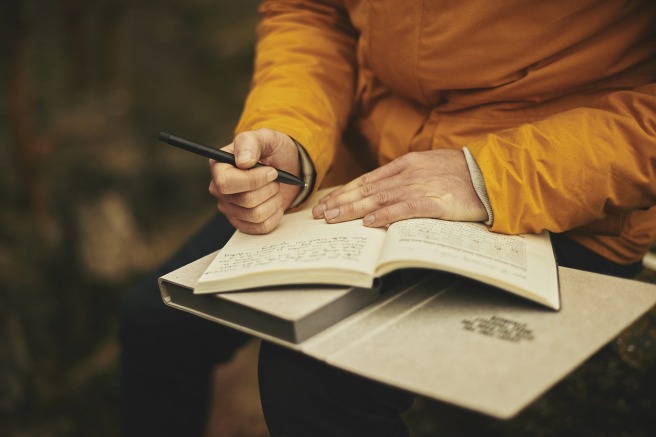 Recently, I unearthed some rough drafts along with stacks of old notebook journals. One of them (below) was workshopped several years ago with a wonderful friend and fellow writer.

I have been seeking something I can polish into a finished piece of fiction as an example of substantive editing for you as I go along.

Today I’d like to share what I’ll be editing.  As you look it over, what changes or questions come quickest to mind?

Gabriel Kitson’s The Complexities of Weynid the Savage (2001)

-book review by Alexa K., special to the Herald

“Weynid the Savage” never actually published an official book, but now his many-times-great grandson has finished the job. Gabriel Kitson was in town on the 15th to autograph copies of his new book. Kitson revealed his relief at finally seeing some of his ancestor’s work becoming immortalized worldwide.

From all accounts we can get, Weynid sounds like quite a guy. Indeed, once you get to know him, he doesn’t seem so wild afterall. Kitson includes myriads of translations of conversations and travel notes involving the man.

During the Q&A session before the signing, Kitson said he was sad that this first edition of The Complexities of Weynid the Savage was not able to include the sketches described in the East and South sections, but hopes that sales will allow for “a limited special edition along those lines.”

Would Kitson (no immediate relation to reviewer) ever be interested in tracing the footsteps of his now-famous forefather? He replied that no, that was left to those the book inspires. Something suggests that he might’ve taken up the challenge with alacrity at an earlier age.

Of interest to this writer is the layout of the volume, which is divided into one section for each of the four main compass points. The book starts out in the North, covering The Savage’s travels in that direction (through Scandinavia and what is now Russia), and works its way East, South, and then sets reasonably to a conclusion in the West.

[The Haig High Herald was unable to run this piece as planned in its March 2002 issue due to limited space (the golf team’s surprising success at State necessitated an extended sports section). It was instead circulated throughout the faculty department at my Haig-Penderton Middle School several years before I committed to attempting to untangle the words of Weynid and my uncle. -ALK]

Is this only a rough draft? No, but I see it does still need more than a light touch to make the draft final.

This is the first in a series of articles following this manuscript through a medium-level substantive content editing process.

This site is very much a “Work in Progress.”  Once this WIP label has been removed, you’ll know it’s ready for more critical eyes. It’s entirely possible this won’t be for some time. (If you were instead for some reason expecting a literal mental bear, please check to see if it has arrived.)